Skardu Valley the central valley of Gilgit-Baltistan, is an epitome of beauty, serenity and wilderness in the extreme north of Pakistan. Mighty Tracks are connected to some of the world’s highest mountains which includes K2, K3, and Gasherbrum Therefor, it is also known as ‘Land of Giants’. Above all, These giants mountains appeal to thousands of hikers from all over the world every year in Skardu Valley. Sadly, A few of them  have even lost their lives in efforts to summit these steep climbs. On the KKH, after Jaglot, a adventurous road will take you towards Skardu. In addition, One is greeted with several streams, springs, and the hospitality of the local people during the seven hour journey. Soon after crossing the old wooden bridge built over the River Indus, one reaches Shangrilla.

The temperature goes fall in when the winter season hit the Skardu Valley. If you are also interested in traveling to Skardu Valley, then this blog will be of interest to you. A comprehensive guide to Skardu is offered in this post, along with some of its outstanding natural features and tourist attractions.

Best time to visit Skardu is June to October. When the weather is moderate enough. Are you familiar with Skardu Valley in Gilgit-Baltistan? It is famous for its wonderful topography and miraculous weather. It is unlike any other place in the world. All kinds of tourists come to this captivating valley, including nature lovers, photographers, documentarians, and mountaineers

Skardu sits at a height of 7,320 feet (2231 meters), making it one of the most beautiful retreats for  mountaineers. Mountain ranges surround it, including the Karakorum. About ten kilometres in width and forty kilometres in length comprise the valley. Confluence of Shigar and Indus rivers is a unique location for this ancient city. One of the most remarkable natural features in Pakistan is this feature. Skardu valley is a paradise of lush greenery, historic forts and panoramic mountain views, as well as a cold desert, freshwater rivers and lakes. We will now review all these features in detail as we discuss one of Pakistan’s most beautiful valleys.

In the local language, Skardu Fort is also called ‘Kharpocho’, which means ‘King of Forts’. As an important fortress of the region during the 16th century, King Sher Ali Khan Anchan built this fort on his orders. This fort was built on a mountaintop as a defensive measure against external threats. It consisted of watching the entry and exit routes to and from the valley. 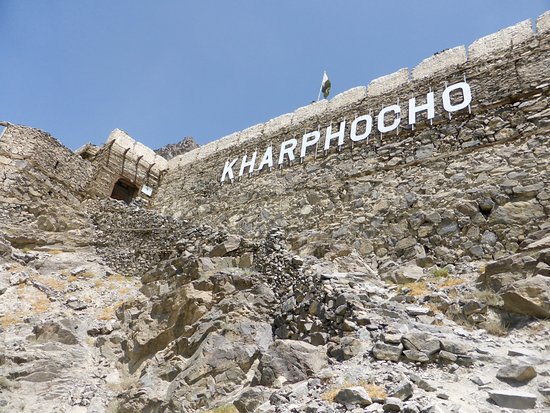 A wall of the fort, which looks quite prominent due to its mountain-top location, bears a large plaque displaying the name of the fort as a way to promote tourism in the Skardu Valley. At Skardu Fort, one can see the entire valley in a panoramic view.

How to reach Skardu

Well, if you have already begun packing your things for your trip to Skardu, we’d like to tell you more about routes and modes of transportation to help make your trip a success. By road, it will take you about 13 hours (600 kilometers) if you are travelling from Islamabad, Pakistan’s capital city. If you want to get to Skardu, take N-15 National Highway via Skardu road. We also arrange Skardu tour packages in group or Privately starting from Rs.22,000 or less.

Balti culture is rich in food. Some of the major and famous foods are Prapoo, Marzan, Balay Mamtu, Azoq, Namkeen Chaye, Zerchong etc.